What do you do in Vermont in the fall when it is cloudy and raining?  Without the sun the autumn leaves don’t have the same brilliance, so there is no point in doing a “leef peeper” drive.  One great choice is the Rock of Ages Quarry 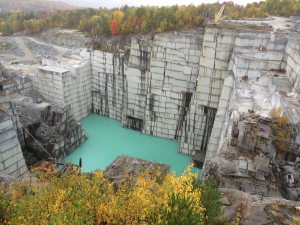 (http://www.rockofages.com/).  A quarry?  Are you kidding?  Why would you think that would be a great choice?  I actually went along with it because Curtis thought it would be interesting.  And, as is often the case, he was right! There was a tour leaving from the visitor center just after we arrived, so we bought our tickets ($5 each) and hopped onto the yellow school bus for the short ride to the quarry.  There were only 4 other people on the tour, which is always a good thing…the fewer the better!  One couple was from California, the other from England. The bus took us straight to the quarry that is currently being worked; it is almost 600 feet deep!  The tour guide explained that the workers (about 7 workers are on a crew) are lowered into the quarry in a cage attached to the crane.  They cut the granite into big sections using drills, saws, and explosives; it takes about a month to get each block ready to be lifted out of the quarry with the crane.  Each section can weigh as much as three 747 airplanes.  In the pictures, you can see where the blocks have been cut out, and you can just make out the block they are currently working on below the crane on the far right.  At the rate they are able to cut the granite out, this quarry will last another 4,000+ years! 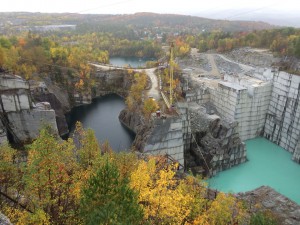 The water at the bottom of the quarry currently being worked is a vivid aquamarine, made that color by the granite dust that runs off when the granite is being wet-cut.  In the picture, you can see the vivid aquamarine color of the water in the current quarry compared to the darker color of the older quarry. The granite in this quarry is a gray color, and has very few imperfections (back when they used black powder to loosen the blocks there was a lot more waste!).  This granite is used for memorials, mausoleums, and tombstones.  Because of the high quality (no cracks/fractures), it will last forever.  Most of the granite tombstones in America originate in the Rock of Ages quarry. During the bus ride, you can look out the window and see the “grout piles” of granite, which are the pieces of granite that have cracks or fractures.  They are everywhere!  Since 1885, the rejected granite has simply been dumped around the quarry grounds, and I’ve read that the grout piles can be found all over town. If you wish, you can bowl on the granite bowling lane, which is located just outside of the visitor center.  We chose not to, because of the rain.  Our guide explained that this was a prototype bowling lane, made in the 1950’s.  Granite lanes never caught on because the ball didn’t react to the granite the same as it does wood…most of the balls thrown were gutter balls! We were at the quarry on a Sunday, so the workers were not in the quarry or in the factory.  We thought we might go back later in the week to see them in action, but did not have time to do so.  If you plan a trip to this quarry, make sure you go during the week and during working hours!

Posted under RV Life,Travels
Comments Off on Rock of Ages Quarry